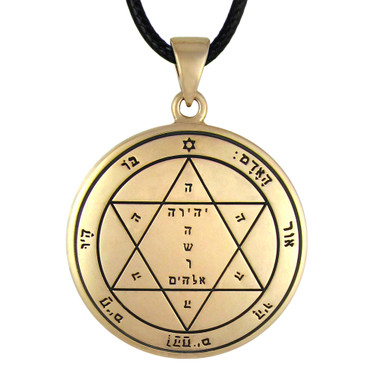 This is a reproduction of a talisman design found in the "Key of Solomon", a grimoire of ceremonial magic attributed to King Solomon. Containing influences of Hermetic alchemy, Roman Astrology and Kabbalah, Solomon's magic is a cornerstone of the Western Esoteric occult tradition. The grimoire explains: "This Pentacle serveth with great success against all kinds of diseases, if it be applied unto the afflicted part." Samuel Liddell MacGregor Mathers, a ceremonial magician and editor of the most common edition of the book, further describes: "The letter He, in the angles of the Hexagram. Within the same the Names IHVH, IHSHVH Yeheshuah (the mystic Hebrew Name for Joshua or Jesus, formed of the ordinary IHVH with the letter SH placed therein as emblematical of the Spirit), and Elohim. Around it is the sentence, John i. 4:--'In Him was life, and the life was the light of man.' This may be adduced as an argument of the greater antiquity of the first few mystical verses of the Gospel of St. John."