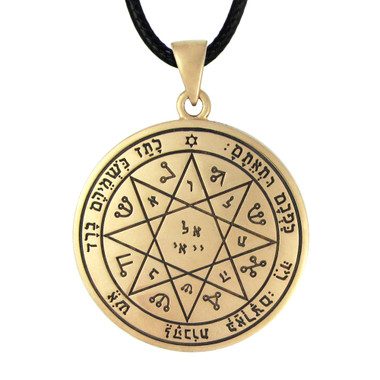 This is a reproduction of a talisman design found in the "Key of Solomon", a grimoire of ceremonial magic attributed to King Solomon. Containing influences of Hermetic alchemy, Roman Astrology and Kabbalah, Solomon's magic is a cornerstone of the Western Esoteric occult tradition. This talisman represents the spirit of Mars, and its associations are with victory in battle and protection from enemies. Samuel Liddell MacGregor Mathers, a ceremonial magician and editor of the most common edition of the book, further describes: "In the center of the Pentacle are the Divine Names, El and Yiai, which have the same numerical value when written in Hebrew. The Letters in Hebrew, and in the Secret Alphabet called the Celestial, compose the Names of Spirits. Round the Pentacle is:– "He gave them hail for rain, and flaming fire in their land. He smote their vines also, and their fig-trees." – Psalm cv. 32,33."