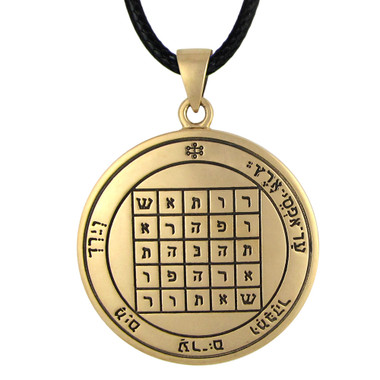 This is a reproduction of a talisman design found in the "Key of Solomon", a grimoire of ceremonial magic attributed to King Solomon. Containing influences of Hermetic alchemy, Roman Astrology and Kabbalah, Solomon's magic is a cornerstone of the Western Esoteric occult tradition. The grimoire explains: "This Pentacle is of great value against adversaries; and of especial use in repressing the pride of the Spirits." Samuel Liddell MacGregor Mathers, a ceremonial magician and editor of the most common edition of the book, further describes: "It will be seen at a glance that it is a square of five, giving twenty-five letters, which, added to the unity, gives twenty-Six, the numerical value of IHVH. The Hebrew versicle surrounding it is taken from Psalm lxxii 8, "His dominion shall be also from the one sea to the other, and from the flood unto the world’s end. This passage consists also of exactly twenty-five letters, and its total numerical value (considering final letters with increased numbers), added to that of the Name Elohim, is exactly equal to the total numerical value of the twenty-five letters in the Square."