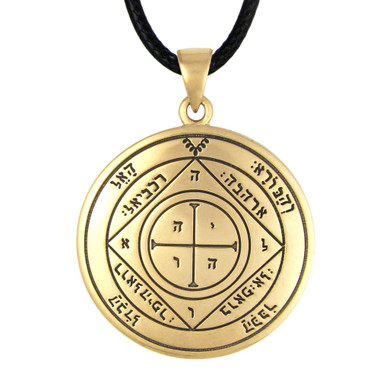 This is a reproduction of a talisman design found in the "Key of Solomon", a grimoire of ceremonial magic attributed to King Solomon. Containing influences of Hermetic alchemy, Roman Astrology and Kabbalah, Solomon's magic is a cornerstone of the Western Esoteric occult tradition. The grimoire explains: "This Pentacle defendeth those who invoke the Spirits of Saturn during the night; and chaseth away the Spirits which guard treasures." Samuel Liddell MacGregor Mathers, a ceremonial magician and editor of the most common edition of the book, further describes: "The Hebrew words around the sides of the triangle are from Deut. vi.4:– "Hear, O Israel, IHVH ALHINVH is IHVH ACHD." The surrounding versicle is from Psalm cix. 18:– "The Hebrew letters in the angles of the Cross are those of the Name IHVH. Those in the Angles of the Square form ALVH, Eloah. Round the four sides of the Square are the Names of the Angels:– Arehanah, Rakhaniel, Roelhaiphar, and Noaphiel. The versicle is: "A Great God, a Mighty, and a Terrible."– Deut x. 17."