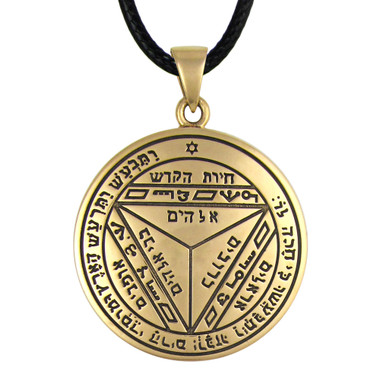 This is a reproduction of a talisman design found in the "Key of Solomon", a grimoire of ceremonial magic attributed to King Solomon. Containing influences of Hermetic alchemy, Roman Astrology and Kabbalah, Solomon's magic is a cornerstone of the Western Esoteric occult tradition. The grimoire explains: "This Pentacle is fit for exciting earthquakes, seeing that the power of each order of Angels herein invoked is sufficient to make the whole Universe tremble." Samuel Liddell MacGregor Mathers, a ceremonial magician and editor of the most common edition of the book, further describes: "Within the Pentacle are the Names of the Nine Orders of Angels, those of six of them in ordinary Hebrew Characters, and the remainder in the letters which are known as "the Passing of the River." These Nine Orders are:– 1, CHAIATH HA-QADESCH, Holy Living Creatures; 2, AUPHANIM, Wheels; 3, ARALIM, Thrones; 4, CHASCHMALIM, Brilliant Ones; 5, SERAPHIM, Fiery Ones; 6, MELAKIM, Kings; 7, ELOHIM, Gods; 8, BENI ELOHIM, Sons of the Elohim; 9, KERUBIM, Kerubim. The versicle is from Psalm xviii 7:– "Then the earth shook and trembled, the foundations of the hills also moved and were shaken, because He was wroth."