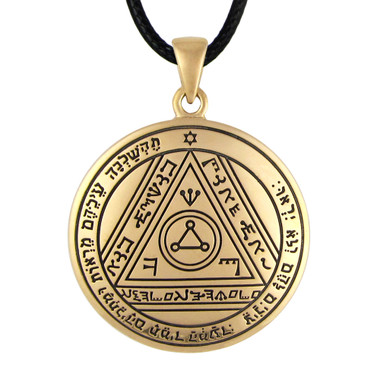 Bronze 6th Pentacle of the Sun Talisman for Subterfuge

This is a reproduction of a talisman design found in the "Key of Solomon", a grimoire of ceremonial magic attributed to King Solomon. Containing influences of Hermetic alchemy, Roman Astrology and Kabbalah, Solomon's magic is a cornerstone of the Western Esoteric occult tradition. The grimoire explains: "It serveth excellently for the operation of invisibility, when correctly made." Samuel Liddell MacGregor Mathers, a ceremonial magician and editor of the most common edition of the book, further describes: "In the centre is the Mystical letter Yod, in the Celestial Alphabet. The three letters in the 'Passing of the River' writing, in the Angles of the triangle, form the great Name Shaddaï. The words in the same characters round its three sides are, in my opinion, from Genesis 1. 1:--'In the beginning the Elohim created,' etc.; but the characters are sadly mangled in the MSS. The versicle is from Psalms lxix. 23, and cxxxv. 16:--'Let their eyes be darkened that they see not and make their loins continually to shake. They have eyes and see not.'"