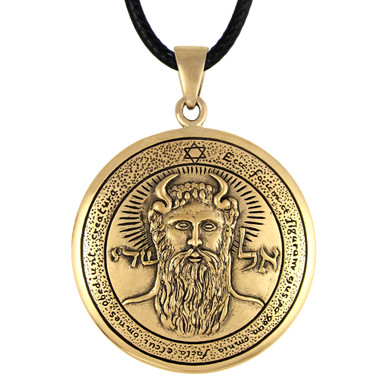 Bronze 1st Pentacle of the Sun for Power

This is a reproduction of a talisman design found in the "Key of Solomon", a grimoire of ceremonial magic attributed to King Solomon. Containing influences of Hermetic alchemy, Roman Astrology and Kabbalah, Solomon's magic is a cornerstone of the Western Esoteric occult tradition. The grimoire explains: "The Countenance of Shaddai the Almighty, at Whose aspect all creatures obey, and the Angelic Spirits do reverence on bended knees." Samuel Liddell MacGregor Mathers, a ceremonial magician and editor of the most common edition of the book, further describes: "This singular Pentacle contains the head of the great Angel Methraton or Metatron, the vice-gerent and representative of Shaddai, who is called the Prince of Countenances, and the right-hand masculine Cherub of the Ark, as Sandalphon is the left and feminine. On either side is the Name 'El Shaddai.' Around is written in Latin:-- 'Behold His face and form by Whom all things were made, and Whom all creatures obey." It is said to be effective for garnering respect and obedience.