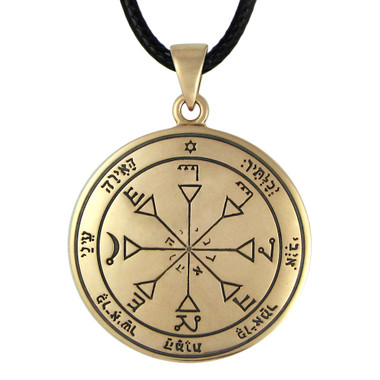 Bronze 4th Pentacle of the Sun Talisman for Awareness

This is a reproduction of a talisman design found in the "Key of Solomon", a grimoire of ceremonial magic attributed to King Solomon. Containing influences of Hermetic alchemy, Roman Astrology and Kabbalah, Solomon's magic is a cornerstone of the Western Esoteric occult tradition. The grimoire explains: "This serveth to enable thee to see the Spirits when they appear invisible unto those who invoke them; because, when thou hast uncovered it, they will immediately appear visible." Samuel Liddell MacGregor Mathers, a ceremonial magician and editor of the most common edition of the book, further describes: "The Names IHVH, Adonai, are written in the center in Hebrew; and round the radii in the mystical characters of the "Passing of the River." The versicle is from Psalm xiii. 3,4:-"Lighten mine eyes that I sleep not in death, lest mine enemy say, I have prevailed against him."