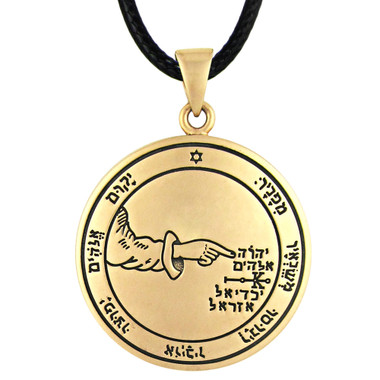 Bronze 5th Pentacle of the Moon Talisman for Protection

This is a reproduction of a talisman design found in the "Key of Solomon", a grimoire of ceremonial magic attributed to King Solomon. Containing influences of Hermetic alchemy, Roman Astrology and Kabbalah, Solomon's magic is a cornerstone of the Western Esoteric occult tradition. The grimoire explains: "It serveth to have answers in sleep. Its Angel Iachadiel serveth unto destruction and loss, as well as unto the destruction of enemies. Thou mayest also call upon him by Abdon and Dale against all Phantoms of the night, and to summon the souls of the departed from Hades." Samuel Liddell MacGregor Mathers, a ceremonial magician and editor of the most common edition of the book, further describes: "The Divine Names IHVH and Elohim, a mystical character of the Moon, and the Names of the Angels Iachadiel and Azarel. The versicle is from Psalm lxviii. 1:– "Let God arise, and let His enemies be scattered; let them also who hate Him flee before Him."