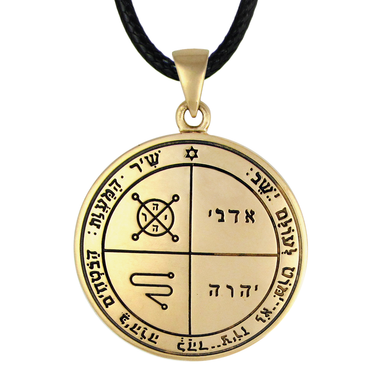 This is a reproduction of a talisman design found in the "Key of Solomon", a grimoire of ceremonial magic attributed to King Solomon. Containing influences of Hermetic alchemy, Roman Astrology and Kabbalah, Solomon's magic is a cornerstone of the Western Esoteric occult tradition. The grimoire explains: "This defendeth and protecteth those who invoke and cause the Spirits to come. When they appear show unto them this Pentacle and immediately they will obey." Samuel Liddell MacGregor Mathers, a ceremonial magician and editor of the most common edition of the book, further describes: "In the upper left hand corner is the Magical Seal of Jupiter with the letters of the Name IHVH. In the others are the Seal of the Intelligence of Jupiter, and the Names Adonai and IHVH. Around it is the Versicle from Psalm cxxv. 1:– "A Song of degrees. They that trust in IHVH shall be as Mount Zion, which cannot be removed, but abideth for ever."