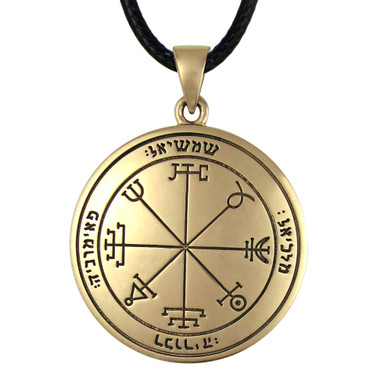 Bronze 2nd Pentacle of the Sun Talisman for Protection

This is a reproduction of a talisman design found in the "Key of Solomon", a grimoire of ceremonial magic attributed to King Solomon. Containing influences of Hermetic alchemy, Roman Astrology and Kabbalah, Solomon's magic is a cornerstone of the Western Esoteric occult tradition. The grimoire explains: "This Pentacle, and the preceding and following, belong to the nature of the Sun. They serve to repress the pride and arrogance of the Solar Spirits, which are altogether proud and arrogant by their nature." It's association is Ideal for suppressing solar (masculine) energies that become a danger to you. Samuel Liddell MacGregor Mathers, a ceremonial magician and editor of the most common edition of the book, further describes: "Mystical characters of the Sun and the Names of the Angels:– Shemeshiel, Paimoniah, Rekhodiah, and Malkhiel."