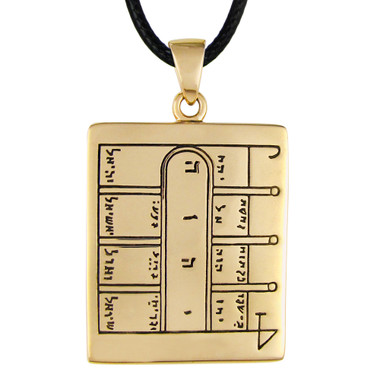 Bronze 1st Pentacle of the Moon for Opportunity

This is a reproduction of a talisman design found in the "Key of Solomon", a grimoire of ceremonial magic attributed to King Solomon. Containing influences of Hermetic alchemy, Roman Astrology and Kabbalah, Solomon's magic is a cornerstone of the Western Esoteric occult tradition. The grimoire explains: "This and the following serve to call forth and invoke the Spirits of the Moon; and it further serveth to open doors, in whatever way they may be fastened." Samuel Liddell MacGregor Mathers, a ceremonial magician and editor of the most common edition of the book, further describes: "The Pentacle is a species of hieroglyphic representation of a door or gate. In the centre is written the Name IHVA. On the right hand are the Names IHV, IHVH, AL, and IHH. On the left hand are the Names of the Angels: Schioel, Vaol, Yashiel, and Vehiel. The versicle above the Names on either side, is from Psalm cvii. 16:-- 'He hath broken the Gates of brass, and smitten the bars of iron in sunder.'"