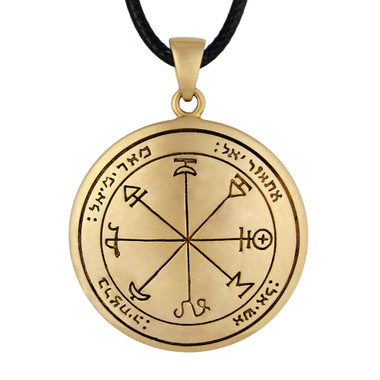 This is a reproduction of a talisman design found in the "Key of Solomon", a grimoire of ceremonial magic attributed to King Solomon. Containing influences of Hermetic alchemy, Roman Astrology and Kabbalah, Solomon's magic is a cornerstone of the Western Esoteric occult tradition. The grimoire explains: "It is proper for invoking Spirits of the Nature of Mars, especially those which are written in the Pentacle." Mars is associated with warfare, victory and masculine energy. Samuel Liddell MacGregor Mathers, a ceremonial magician and editor of the most common edition of the book, further describes: "Mystical Characters of Mars, and the Names of the four Angels:-- Madimiel, Bartzachiah, Eschiel, and Ithuriel written in Hebrew around the Pentacle."