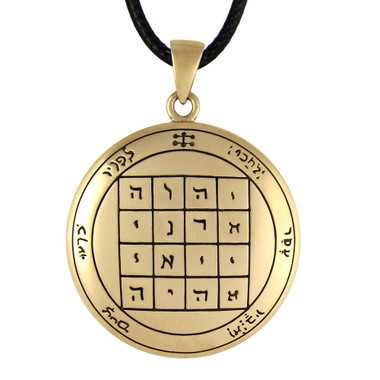 This is a reproduction of a talisman design found in the "Key of Solomon", a grimoire of ceremonial magic attributed to King Solomon. Containing influences of Hermetic alchemy, Roman Astrology and Kabbalah, Solomon's magic is a cornerstone of the Western Esoteric occult tradition. The grimoire explains: "This Pentacle is of great value and utility for striking terror into the Spirits. Wherefore, upon its being shown to them they submit, and kneeling upon the earth before it, they obey." Samuel Liddell MacGregor Mathers, a ceremonial magician and editor of the most common edition of the book, further describes: "The Hebrew Letters within the square are the four great Names of God which are written with four letters:-- IHVH, Yod, He, Vau, He; ADNI, Adonai; IIAI, Yiai (this Name has the same Numerical value in Hebrew as the Name EL) ; and AHIH, Eheieh. The Hebrew versicle which surrounds it is from Psalm lxxii. 9; 'The Ethiopians shall kneel before Him, His enemies shall lick the dust.'"