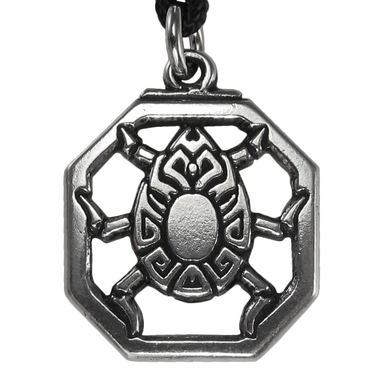 To the Ancient Egyptians the Scarab was a symbol of Khepri, the early morning manifestation of the Sun God Ra, [since the beetle's behavior of rolling a ball of dung across the ground seemed to represent Khepri's monumental task of rolling the Sun across the Heavens.] In Ancient Egypt, Scarabs were placed with the mummified remains of loved ones symbolizing a source of New Life in the next world. Scarabs themselves were also mummified, illustrating their importance to that Culture. Scarabs were also thought to protect the Heart and, as such, were worn as Protective Amulets. In many shamanic societies are myths relating the creator of their world to magical beetles. In some tribes from South America a big scarab, named Aksak, modeled man and woman from clay. Our Original Scarab design is placed inside an octagon whose eight pillars of Strength represent Eternal Life further enhancing the Powers of the Magical Scarab.