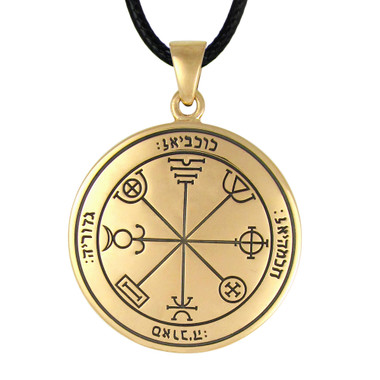 This is a reproduction of a talisman design found in the "Key of Solomon", a grimoire of ceremonial magic attributed to King Solomon. Containing influences of Hermetic alchemy, Roman Astrology and Kabbalah, Solomon's magic is a cornerstone of the Western Esoteric occult tradition. The grimoire explains: "This and the following serve to invoke the Spirits subject unto Mercury; and especially those who are written in this Pentacle." Mercury is associated with intellectual pursuits, and is said to lend positive influence to activities such as studying. Samuel Liddell MacGregor Mathers, a ceremonial magician and editor of the most common edition of the book, further describes: "Mystical Characters of Mercury, and the Names of the Angels: Kokaviel, Gheoriah, Savaniah, and Chokmahiel."