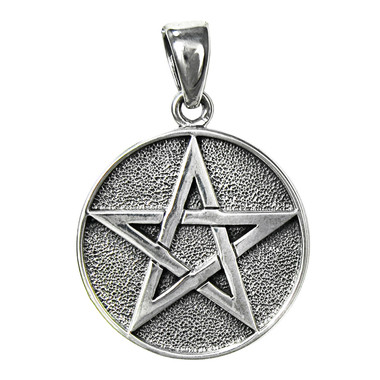 The pentagram, a five-pointed star, is sacred geometry and a protective symbol used by various spiritual traditions throughout time. To the Pythagoreans, it represented mathematical perfection. In medieval Christian times, it represented the five wounds of Christ and the five senses, and was incorporated into the motifs of churches as a ward against evil. It is an important symbol in Hermetic and Ceremonial Magick, and is the religious symbol of Wicca and Neo-pagan traditions. In magical application, the symbol represents the four elements (earth, air, fire, water), with the top point representing Spirit. The Yin Yang symbol represents the perfect balance between dualities (i.e. masculine and feminine, light and dark, warm and cool). The smaller circles within each half remind us that a portion of the opposing element exists in each duality. It is the religious symbol of Taoism and is worn by followers of Eastern philosophy.