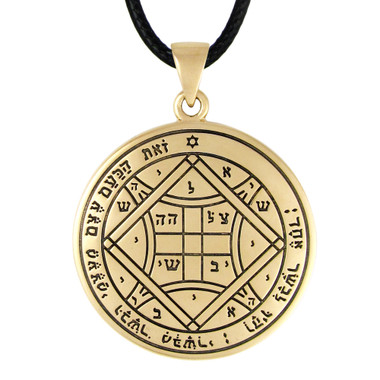 This is a reproduction of a talisman design found in the "Key of Solomon", a grimoire of ceremonial magic attributed to King Solomon. Containing influences of Hermetic alchemy, Roman Astrology and Kabbalah, Solomon's magic is a cornerstone of the Western Esoteric occult tradition. The talisman is associated with Venus and is said to lend positive influence to the pursuit of love. Samuel Liddell MacGregor Mathers, a ceremonial magician and editor of the most common edition of the book, further describes: "At the four Angles of the Figure are the four letters of the Name IHVH. The other letters form the Names of Spirits of Venus, e.g.:– Schii, Eli, Ayib, etc. The versicle is from Genesis ii. 23, 24:– "This is bone of my bones, and flesh of my flesh. And they two were one flesh."