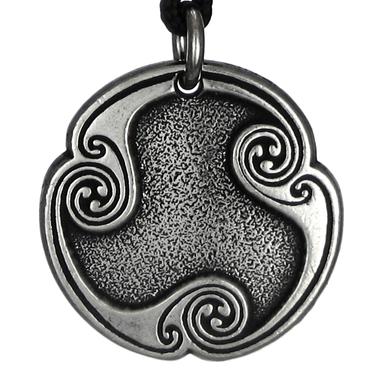 This is the last of our series of rune pendants, and Wyrd is traditionally represented without a marking. As the rune of destiny, Wyrd promotes understanding of the unseen web, which connects cause with effect in a synchronous pattern. This total perception of the unknowable unlocks the meaning of ones life and the significance behind each encounter. Casting meaning: the blank rune signifies that this is a time of learning through experience. We are in a situation that was destined for us to encounter. The true meaning lies below the surface of what is immediately perceivable. This knowledge, however, must remain undisclosed until the situation has abated. The Mystical Odin, father of the Norse Gods, passed his knowledge of magic and rune lore to poets, sorcerers, and sages. Mythology says that Odin gained his knowledge of runes through suffering and sacrifice. In the European Dark Ages, kings and priests were suspicious of runes; those in possession of rune knowledge were often burned to death! Runes are more than a mere alphabet; they are the tools which unlock the mysteries of the universe for those who understand them. Our runes are fashioned after the futhark alphabet. They stand for objects and actions. They can be used in healing and meditation, as well as magic and divination. Retaining the authenticity of the original alphabet, our runes are attractively designed for the modern wearer.