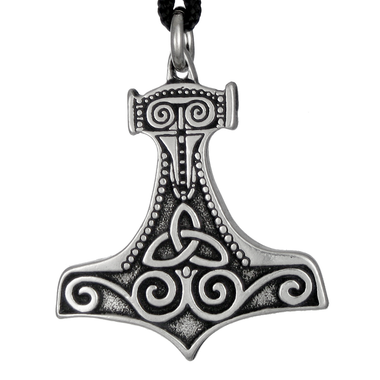 In Norse mythology, Mjölnir is the hammer of Thor, a major god associated with thunder in Norse mythology. Distinctively shaped, Mjölnir is depicted in Norse mythology as one of the most fearsome weapons, capable of leveling mountains. Though generally recognized and depicted as a hammer, Mjölnir is sometimes referred to as an axe or club. In the 13th century Prose Edda, Snorri Sturluson relates that the Svartálfar Sindri, the brother of Brokkr, made Mjöllnir while in a contest with Loki to see who could make the most wonderful and useful items for the Gods and Goddesses in Asgard. ["Mjölnir", Wikipedia]