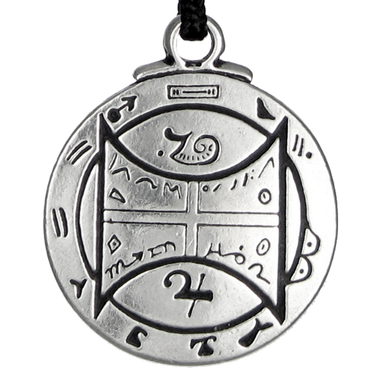 Pewter Talisman For Communication with Animals

This talisman is ideal for those who wish to increase rapport and communication with animals. The talisman's design is also credited for protecting against animal attacks. The seal design is lifted from the grimoire, "The Black Pullet" (La poule noire). According to wikipedia, it teaches "the 'science of magical talismans and rings', including the art of necromancy and Kabbalah. It is believed to have been written in the 18th century by an anonymous French officer who served in Napoleon's army. The text takes the form of a narrative centering on the French officer during the Egyptian expedition led by Napoleon (referred to here as the 'genius') when his unit are suddenly attacked by Arab soldiers (Bedouins). The French officer manages to escape the attack, but is the only survivor. An old Turkish man appears suddenly from the pyramids and takes the French officer into a secret apartment within one of the pyramids. He nurses him back to health whilst sharing with him the magical teachings from ancient manuscripts that escaped the 'burning of Ptolemy's library'.

Double sided pendant; different seal on each side