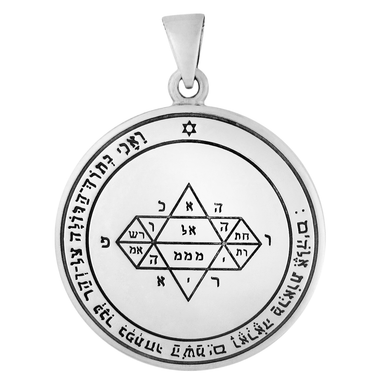 This is a reproduction of a talisman design found in the "Key of Solomon", a grimoire of ceremonial magic attributed to King Solomon. Containing influences of Hermetic alchemy, Roman Astrology and Kabbalah, Solomon's magic is a cornerstone of the Western Esoteric occult tradition. The grimoire explains: "This hath great power. It serveth for assured visions. Jacob being armed with this Pentacle beheld the ladder which reached unto heaven." Samuel Liddell MacGregor Mathers, a ceremonial magician and editor of the most common edition of the book, further describes: "The Hebrew letters within the Pentacle are taken from the five last words of the versicle which surrounds it, each of which contains five letters. These are, then, recombined so as to form certain Mystical Names. The versicle is taken from Ezekiel i. 1:– "As I was among the captives by the river of Chebar, the heavens were opened, and I saw visions of Elohim." In my opinion the versicle should only consist of the five last words thereof, when the anachronism of Jacob using a Pentacle with a sentence from Ezekiel will not longer exist."

You may purchase the pendant alone, or pair it with the perfect chain! You can view our full selection of styles and sizes here.