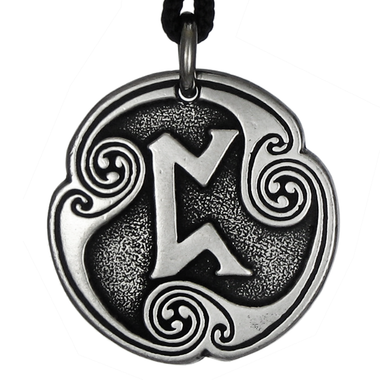 Of all the runes, Pertho's secret was the most guarded. Ancient runemasters who worked their art understood that although one is born with the right of free will, circumstances limit our use of it. How we react in a particular situation directly determines the outcome of the next chapter in one's life. Pertho allows one to see the whole structure and sequence of events that led to shape it! The Mystical Odin, father of the Norse Gods, passed his knowledge of magic and rune lore to poets, sorcerers, and sages. Mythology says that Odin gained his knowledge of runes through suffering and sacrifice. In the European Dark Ages, kings and priests were suspicious of runes; those in possession of rune knowledge were often burned to death! Runes are more than a mere alphabet; they are the tools which unlock the mysteries of the universe for those who understand them. Our runes are fashioned after the futhark alphabet. They stand for objects and actions. They can be used in healing and meditation, as well as magic and divination. Retaining the authenticity of the original alphabet, our runes are attractively designed for the modern wearer.