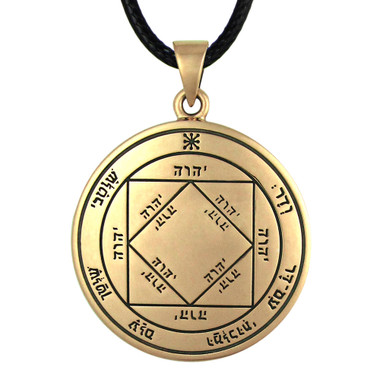 Bronze 3rd Pentacle of the Sun Talisman for Victory

This is a reproduction of a talisman design found in the "Key of Solomon", a grimoire of ceremonial magic attributed to King Solomon. Containing influences of Hermetic alchemy, Roman Astrology and Kabbalah, Solomon's magic is a cornerstone of the Western Esoteric occult tradition. The grimoire explains: "This serveth in addition (to the effects of the two preceding) to acquire Kingdom and Empire, to inflict loss, and to acquire renown and glory, especially through the Name of God, Tetragrammaton, which therein is twelve times contained." Samuel Liddell MacGregor Mathers, a ceremonial magician and editor of the most common edition of the book, further describes: "The Name IHVH, twelve times repeated; and a versicle somewhat similar to Daniel iv. 34:– "My Kingdom is an everlasting Kingdom, and my dominion endureth from age to age."