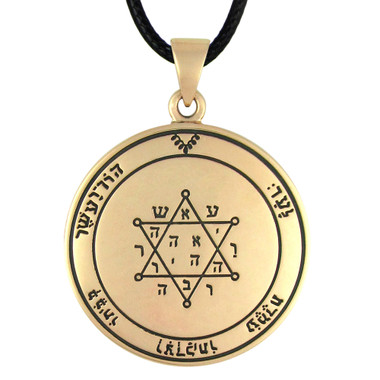 This is a reproduction of a talisman design found in the "Key of Solomon", a grimoire of ceremonial magic attributed to King Solomon. Containing influences of Hermetic alchemy, Roman Astrology and Kabbalah, Solomon's magic is a cornerstone of the Western Esoteric occult tradition. The grimoire explains: "This serveth to invoke the Spirits of Jupiter, and especially those whose Names are written around the Pentacle, among whom Parasiel is the Lord and Master of Treasures, and teacheth how to become possessor of places wherein they are." Samuel Liddell MacGregor Mathers, a ceremonial magician and editor of the most common edition of the book, further describes: "This Pentacle is composed of Mystical Characters of Jupiter. Around it are the Names of the Angels:--Netoniel, Devachiah, Tzedeqiah, and Parasiel, written in Hebrew."