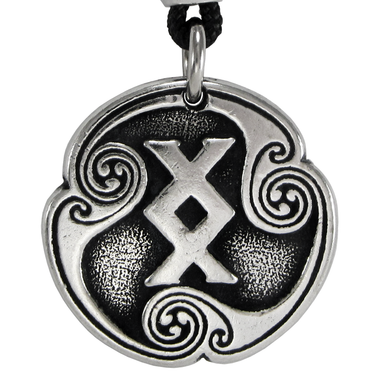 Ingwaz (Inguz) is the gateway by which man can achieve insight into the intuitive nature that encompasses feminine perceptions. To do this man has to be capable of giving up his fear of the truth, allowing himself to see the root of his motivations and why these factors are his driving force. The ability to think before speaking gives one time to phrase a thought properly, giving others clear and precise understanding. Honesty and integrity are the two most important attributes reached from the power of Ingwaz. These attributes are required to understand the intricate reasoning within the feminine psyche. The Mystical Odin, father of the Norse Gods, passed his knowledge of magic and rune lore to poets, sorcerers, and sages. Mythology says that Odin gained his knowledge of runes through suffering and sacrifice. In the European Dark Ages, kings and priests were suspicious of runes; those in possession of rune knowledge were often burned to death! Runes are more than a mere alphabet; they are the tools which unlock the mysteries of the universe for those who understand them. Our runes are fashioned after the futhark alphabet. They stand for objects and actions. They can be used in healing and meditation, as well as magic and divination. Retaining the authenticity of the original alphabet, our runes are attractively designed for the modern wearer.