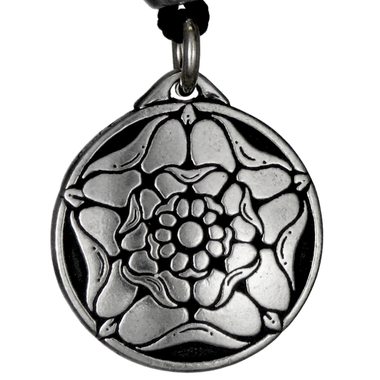 The British dynasty of the Tudors was symbolized by the Tudor Rose. The rose became truly Royal during the English Civil War; The War of the Roses (1455-1485). The winner, Tudor Henry Vii, merged his Lancastrian red rose with the white rose of his York bride, creating the Tudor Rose (the ptals of a red rose enfolding the petals of a white rose). This Rose of England symbolized unity and respect and was worn as a symbol of loyalty and allegiance. The Tudors were able to establish England as a world power by positioning their country as a peace-maker between the dueling powers of France and Spain. They also gave England a century of dynastic stability. Most Tudor monarchs came to the throne without strife. This lengthy period of peace allowed England a much needed respite from the Lancastrian-Yorkist wars.