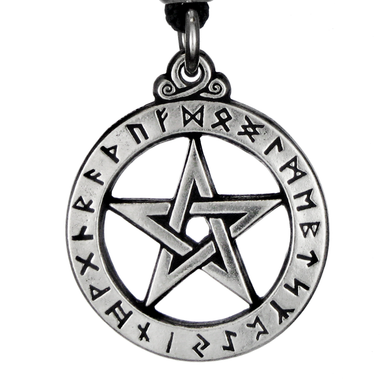 The pentacle has been worn as a powerful protection symbol for thousands of years. Associated in turn with magick, paganism and Christian mysticism, its earliest connections were with worship of the Goddess, from whose sacred five petaled apple blossoms and sees the symbol may have been derived. Like the circle it is considered a protective design because of its continuously connecting points. The pentacle has been called the symbol of man, truth, and completion. Alchemists paired the elements of the earth to those of man  flesh and bones to earth, blood to water, breath to air, body heat to fire, and the soul to ether. The five points also correspond to the five stages of life: birth, puberty, marriage, rest from labors and death. The magical letters surrounding this pentacle is thought to be connected to the Cabalistic Enochian Script of the Elizabethan astrologer and magician, Dr. John Dee. Also called the Witches' Runes', or the "Runes of Honorious", the Theban script is very popular among the elemental crafters of today and is used in writing spells and inscriptions.