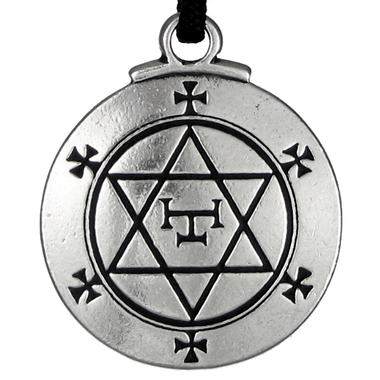 The Hexagram of Solomon is an ancient symbol sometimes called the Star of David. Solomon, the son of David and third King of Israel (10 BC) was a master magician who had authority over all the spirits as well as birds and beasts.

Consisting of two interacting equilateral triangles, the downward point represents the Spirit (masculine fire principle) and the upward point represents Matter (feminine water princple). The Spirit descends from above toward Matter to fashion and give it life, while Matter looks upward, receptively open to elaboration by the Spirit. Solomon's Seal is said to have been cut into the bezel of King Solomon's ring. It is a protective talisman to ward off negative or evil influences and to aid in attaining perfection.

These seals were inspired by the Greater Key of Solomon, a foundational grimoire of Western Esotericism that contains influences of Judaic mysticism/Kabbalah, Roman astrology and Hermetic alchemy.

Every one knoweth in the present day that from time immemorial Solomon possessed knowledge inspired by the wise teachings of an angel, to which he appeared so submissive and obedient, that in addition to the gift of wisdom, which he demanded, he obtained with profusion all the other virtues; which happened in order that knowledge worthy of eternal preservation might not be buried with his body. [The Greater Key of Solomon (1999), Liddell & Mathers]

Double sided pendant; same seal on each side