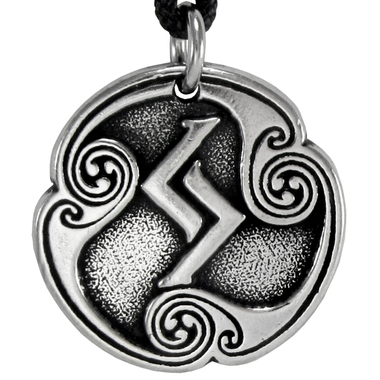 The Rune of Jera (Jeran, Jeraz) translates into "year's harvest". The ancients viewed a year as a division of summer and winter which are interacting compliments of each other. Summer's harvest creates food for winter. This unity is a spiral where every action is shaping the next moment of creation. We can never return to the beginning, as in a circle, for growth is a spiral in which each rotation of life becomes an evolutional development for the next cycle. The Mystical Odin, father of the Norse Gods, passed his knowledge of magic and rune lore to poets, sorcerers, and sages. Mythology says that Odin gained his knowledge of runes through suffering and sacrifice. In the European Dark Ages, kings and priests were suspicious of runes; those in possession of rune knowledge were often burned to death! Runes are more than a mere alphabet; they are the tools which unlock the mysteries of the universe for those who understand them. Our runes are fashioned after the futhark alphabet. They stand for objects and actions. They can be used in healing and meditation, as well as magic and divination. Retaining the authenticity of the original alphabet, our runes are attractively designed for the modern wearer.