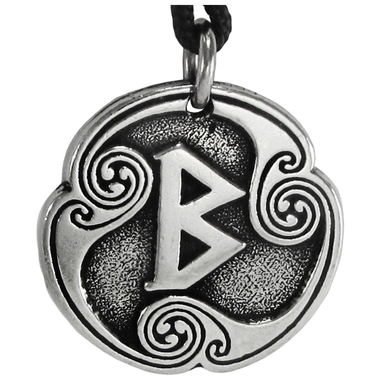 To the ancient people of Europe, the Beorc (Berkanan, Beorc, Bjarken, Bjarka), translated to birch tree, was one of the most sacred living symbols within their culture. Not only was the birth tree a living representation of purification and regeneration, it was a personification of the Earth Mother. As a rune of hidden transformation and growth, Beorc is particularly potent in all workings of women's mysteries. Within all the female children of Earth Mother exists the innate material insight of intuitive reasoning. Illumination from this rune enables one to magnify the raw essence of these powerful gifts. The Mystical Odin, father of the Norse Gods, passed his knowledge of magic and rune lore to poets, sorcerers, and sages. Mythology says that Odin gained his knowledge of runes through suffering and sacrifice. In the European Dark Ages, kings and priests were suspicious of runes; those in possession of rune knowledge were often burned to death! Runes are more than a mere alphabet; they are the tools which unlock the mysteries of the universe for those who understand them. Our runes are fashioned after the futhark alphabet. They stand for objects and actions. They can be used in healing and meditation, as well as magic and divination. Retaining the authenticity of the original alphabet, our runes are attractively designed for the modern wearer.